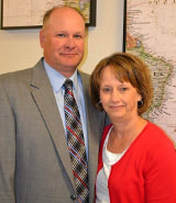 ​Samuel Martin is the Director of World Missions Bearing Precious Seed. He and his wife Barbara are missionaries sent out of Second Baptist Church. He has directed the ministry since September 2001 when the late Dr. William Byers went home to heaven.
World Missions Bearing Precious Seed ministry has representatives who go to churches all over the United States and foreign countries to gather funds used to print Gospel of John and Romans as well as whole King James Bibles. This ministry has 32 seed-line churches helping to collate the signatures into Gospel of John and Romans, as well as numerous churches and individuals who give the funds to purchase the paper and cover material.
WMBPS has had the wonderful privilege of sending over 17 million Gospels in 16 languages to mission fields, as well as 50,000 whole KJV Bibles, free of charge to souls seeking the Word of God.  It has been a blessing to hear personal testimonies from those wonderfully saved as a result of receiving this scripture.

As Second Baptist was attempting to increase its involvement in the Scripture ministry, God was moving in the lives of two other people towards the same end. Dennis and Lee Deneau were at a turning point. Twenty-one years of service in one place had unexpectedly ended, and all existing options were shut off to them, as well. A mutual friend brought Brother Deneau and Pastor Waymire into contact with each other. On April 6, 2016, the Deneaus joined Second Baptist Church, and World Missions Bearing Precious Seed of Festus, Missouri, was officially established! Brother Dennis became our missionary-evangelist, traveling around the country promoting and raising support for the ministry. They also operate an independent ministry, Church Bible Publishers.
While we thank God for what He has done through Bearing Precious Seed so far, our eyes are set toward the future. Long-term goals have been set that will enable us to completely produce all materials in-house at the Seed Barn. The current inventory of John and Romans will expand to include New Testaments and, eventually, whole Bibles. These larger products will be made possible by a printing press and other major assets. As we strive to accomplish the divine will in each of our lives, we invite you to join us as a partner in this mighty endeavor, to proclaim the Gospel in writing unto the ends of the earth!